"See the tree, how big it's grown
but friend it hasn't been too long
it wasn't big...
The first day that she planted,
it was just a twig"

Loosing my cherry would I think be a traumatic experience. The tiny red seedling we found two years ago and subsequently planted behind the lavenders at the the front of the house has now reached 6´in height. It has a nice open shape almost espalier like though it will need pruning soon. In mid March the tree produced a series of single white flowers which appeared at the same time as a cold spell occurred which threatened the local cherry producers´ crop. At a commercial level cherries are very important to the local economy, and the growers response to the weather, was to spray the plants with a waxy foam to protect the newly set fruit buds.
Our plant being red, looks to be an ornamental variety and did not appear to have set fruit. Cherry fruit buds are popular with the finches and it is possible that they could account for any fruit that did set.

A few days ago I found a single fruit bud had formed, already bright red though it is not much bigger than a large pea. And so it is that each morning I check the development of the solitary cherry, if it turns out to be an edible variety it will be the tastiest cherry in the world. Though with so many birds around it may not be us doing the tasting! 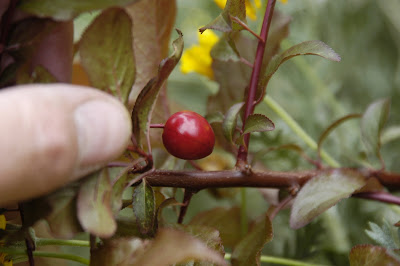 Email ThisBlogThis!Share to TwitterShare to FacebookShare to Pinterest
Labels: Cherry