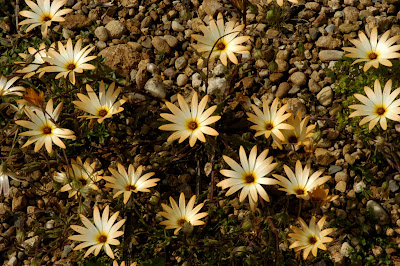 Cape Daisy - African Sun (Osteosperum), this self sown seedling has sprouted between the gravel of our temporary paths and is a real delight. The colour of the stones tones well with the flower and this is probably a natural setting for the plant. The seed originated from a packet of seed sown last year and will provide a welcome future supply of the plant.

The gravel used on the paths, has all been hand riddled from the spoil heaps we created whilst creating beds and borders in what is after all quite a young garden. Amongst the gravel were some hard baked clay soils and that clay has provided a substrate sufficient for opportunist flower seeds to prosper and is also the cause of weed growth throughout the paths. Once the water pipes for the automatic irrigation system have been installed and are leak free then the paths which will cover the pipes will be completed. After washing and cleaning the gravel it will be laid 2-3" thick over a combination of old newspapers and a weed resistant membrane. We will have to source either a retail or wholesale supplier of the same stone if we are to keep our paths uniform.

Despite having to use a membrane to smother some fairly persistant weeds, I wood like to introduce thyme and similar low growing plants to the paths. This African Sun may well feature in those same paths.
Posted by Colin and Carol at 9:42 am