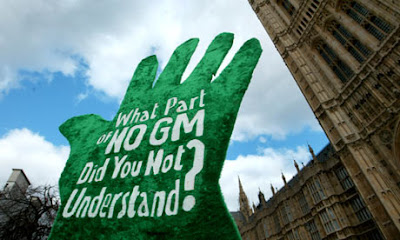 Photograph: Martin Argles for the Observer
Genetically modified crops will be allowed to enter the UK food chain without the need for regulatory clearance for the first time under controversial plans expected to be approved this week....

Relaxing the EU's zero-tolerance position would greatly benefit US feed exporters. The push for Europe to drop its zero-tolerance policy began in 2009 after EU authorities found traces of GM maize in soy shipments from the US and refused to allow its entry. Such recalls are expensive and those affected are unlikely to receive compensation.

GM supporters warn that the current zero-tolerance policy could result in a dramatic shortage of feed for livestock. But critics dismiss the claims as scaremongering and say there is no evidence to back up them up.

"This is a solution without a problem, and the price could be very high indeed when unknown genetically modified organisms are let loose in the food chain," said Eve Mitchell, food policy adviser at Food and Water Europe, a campaign group.

"Rather than ignoring EU food safety laws to help the US soy industry cut costs, we should simply buy the stuff from countries that segregate their GM properly. If it hasn't been tested, why eat it?"

Many of the GM crops, notably soy and maize, that have been found in animal feed imported into Europe are resistant to multiple herbicides. Critics blame these new GM crops for the recent rise of "super weeds" across vast tracts of the US farm belt.

Friends of the Earth Europe said it had obtained expert legal advice questioning the legality of the EU's plan. But European regulators believe that allowing the import of animal feed containing no more than 0.1% of GM traces does not jeopardise food security.