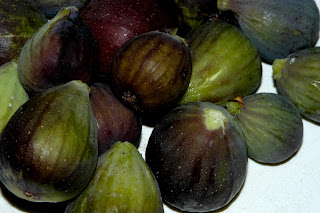 Figueres is the first city you encounter having crossed the border into the Catalunya region of from , at the top of its Mediterranean coast. The city takes its name from the Latin word for fig the bag shaped fruit from the Fig tree (Higuera). Many of the villages around the rural are lucky enough to have wild fig trees growing by the road side. Last year our Moroccan tile installer offered advice on pruning the tree before asking permission to pick some of the fruit for his family. Lack of rain meant he went home empty handed.

This year the little rain we had in May fell at just the right time for the tree to produce edible sized fruit.

We were not certain if we should reduce the numbers of fruit to ensure that we had Figs suitable for the table. Before we could act, we noticed that a pair of Jays (birds - Garrulus glandarius) had taken a liking to the figs. Each day the normally shy birds would visit the tree and pick the small ripe fruits, that we would have removed, before retreating to the shelter of the woodland to consume their delicacy.  Francisco’s sheep are frequent visitors to the Finca and are partial to the leaves of the Fig tree; and some members of the flock will climb up on the backs of their relatives to stretch for leaves that should be out of their reach. A Dutch couple have advised us that if we wish to beat the wasps to our figs then we should pick them before they are fully ripe. We sampled figs they had picked from their own garden and found that the plump fruits had fully matured after picking. I prefer to eat the figs fresh from the tree or with Iberian cured Jamon. Carol also enjoys the dried fruits, so two years ago I dried some of our own figs. The domestic oven I used, on a low heat, did produce some very good figs though I found some of the figs became mouldy after a few days of storage. Commercial ovens obviously remove more of the moisture in the drying process.