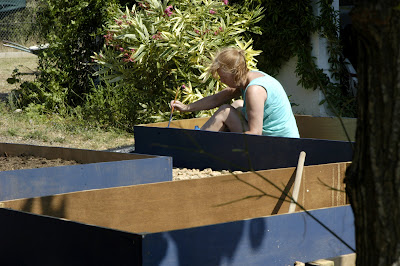 Since our Villa was burgled in 2004 we have had several large sheets of 19mm marine ply-wood in the stable. The wood was used to cover our windows and doors to secure the property against further intrusion; until the new windows and doors were fitted. This wood was very, very expensive.

The poor soil and copious amounts of stones and rocks therein; has been a major factor in pushing us towards utilising raised beds for our seedlings, cuttings and vegetables. Back home in the UK I would probably used 1" thick scaffolding boards for the beds. Here where wood is a luxury item we have been hard pressed to find something as resilient or as cheap. For this reason we are using the plywood which has been sawn down into various planks. With the boxes constructed size of 2.5m x 1.5m we are trying to minimise any splaying out of the timber sides by securing them to timber posts. And also by using the golden coloured rock lifted from last years paths to surround them to a depth of about 3". The midnight blue stain applied to the timber looks fine against the stone too. 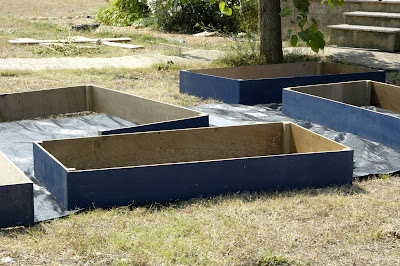 The grasses have taken some killing off but in the first year we are using weed resistant fabric inside the boxes and overlaying that with cardboard packaging.

If it works it works if it doesn't well that will be another project
Posted by Colin and Carol at 2:25 am