... and the Invisible woman of Ordis.


Carol, or so it seems to me, suffers from August madness. Every year about the same time she undertakes some mammoth task which we must work on in the summer sun; endeavours that may bring us to our knees.

This year has been the year of the path. Although we had created paths from the smaller field stones we recovered from the land whilst clearing our flower beds and shrubberies, last year. There was not enough of the stones to cover adequately the area we had planned to pave. So, despite laying the field stones over weed suppressing membrane, the thin layer of stones allowed the weed and grass we had cleared to re-establish itself along those newly laid paths.

Our predicament has been that the house we bought in the summer of 2004, first sign of madness, needed so much work to reform it, that Carol continued to work in England to pay for the 'obras de casa'. And she would then fly in like a whirlwind to work on the house and garden here in Spain. Our summer holidays would be spent on the building site we created and the Spaniards could only wonder why. The natives here work hard during the year but the whole of Spain closes down in the heat of August. Except for us apparently.


We began by lifting the stone we laid last year riddling and washing the stone which was to be reused on our next project. The weeds were dug up and their roots painstakingly extracted from the weave of the weed suppressing membrane. Once the ground was made level we edged the path with marine plywood which was in turn treated with a blue wood stain, and replaced the membrane. With such large areas to pave the only cost effective way to cover the area was to use a fine gravel.

With everybody on holiday we were fortunate to find a company open for administration and maintenance. If we could arrange a 'camion' (lorry) they would load for us. Our friend Manel who had previously levelled the land for us was about to go on holiday but agreed to send his friend to transport our load. Our calculations hazy as they were stipulated that we had to purchase 30 metric tonnes of gravel. Our transport a tractor and trailer had to make two trips
to the supplier.

The driver despite his best efforts was unable to turn the heavily loaded trailer into the garden area we required. He said that he would get as close as he could and tip the gravel through the chain link fence which would act as a giant sieve. In the beginning the theory worked and the gravel tumbled through the fence. Then as the driver jiggled the trailer to maintain the flow, disaster struck; a torrent of gravel chippings flattened the fence before burying it beneath the remaining stone. 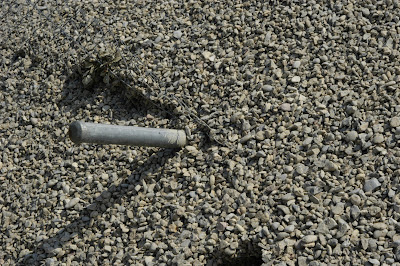 This mountain of gravel would have to be shovelled into a wheel barrow and moved anything up to a hundred yards at a time in order to complete our task, and an absolute nightmare in the summer heat. With the August weather in the mid to high nineties we set about our task.

A peculiar British trait and one that often display in this blog is that when discussing weather we express heat in Fahrenheit and cold in Centigrade. This is probably the result of our living in a temperate British climate without extremes of temperature. Therefore on a sunny day we can say 'Isn't it hot? It must be at least 75° (f)' and conversely 'Isn't it cold it must be 0° (c)'. We as a race are obsessive about the weather which is by world standards usually unremarkable. 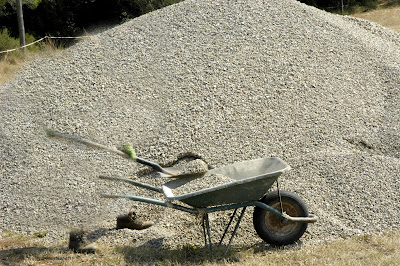 Meanwhile back at the ranch. Carol decided that she would shovel and I would cart the stones around the garden. Despite the fact that she was quite unwell. I meanwhile was still suffering a displaced kneecap. Day after day we toiled in the heat. Barrow load by barrow load we moved the gravel. After two weeks of this work Carol was quite poorly and the strain was showing in her face. I was threatened with dire consequences if I showed photographs of her in that condition. So I took the photograph, and then Photoshoped it to remove her from the picture leaving her boots and gloves behind. It looks like ghostly forces are helping with the landscape. 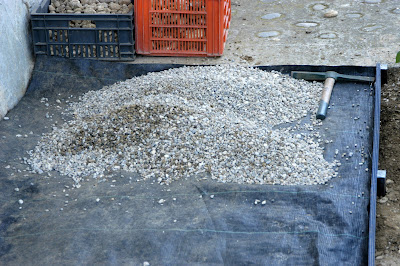 Most of the paths are laid though they will be topped off once we have found a suitable edging. Not being able to kneel down has hindered the project but it will be finished even if it kills us!
Posted by Colin and Carol at 9:43 pm