Lillies and the lily beetle. 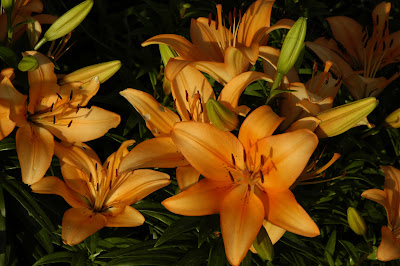 Our lilies gave a stunning display this year and we we hope will be repeated in years to come. The plants are probably ready to be divided though I will do that in the spring. Rather worryingly is the profusion of the red lily beetle that is to be found in the neighbourhood. The beetle, which has a red top but black undersides, has a voracious appetite for lilies and similar plants; though it is the larvae of the species which causes most of the damage. This is an Asiatic bug, just as the lilies themselves were an Asiatic plant, though the bug is found now throughout Europe. The pest is believed to have profited through containerised plant sales, which allows an overwintering adult lily beetle to burrow into the soil. Our own lilies were grown from bare bulbs so our garden pests obviously came from elsewhere in the neighbourhood.

If you are trying to eradicate this particular pest without resort to harmful pesticides, then the handiest of garden tools is the thumb and forefinger, which can be used to pluck the adults from the plant. The orange coloured eggs and larvae of the lily beetle are easily spotted during the initial infestation. They can simply be crushed with the aforementioned thumb and forefinger. After a few days the larvae use their own excrement to conceal that orange colour changing it to a grey black colour resembling mould which is more easily missed. As soon as the spring foliage emerges so do the adult beetles, if you are vigilant then you may stop the egg laying process. It is thought that adults locate the lily plant by scent which seems likely given the fragrance of the blooms. If that is the case then we gardeners need to be vigilant throughout the year.

Carol's sister Marie and husband Alan who garden near Cambridge in south east England fear that the lily beetle has killed off their first year planting. This is a fast spreading pest.
Posted by Colin and Carol at 6:00 pm